TIME ZERO, a feature film script written by Carlo & Erin Carere, was optioned by In Yo FACE Filmworks and is in pre-production as of October, 2022.

Been a minute! So much news, but as I'm a little busy, I'll just pop in here and share a few updates!

So! First and foremost, NEAR DEATH, the short film Carlo and I wrote and produced, is now streaming on multiple platforms, including:

​Our NEWEST project, a feature film script called TIME ZERO, is a FINALIST at the Atlanta Film Festival Screenplay Competition! We are so honored!

It also was in the TOP TEN at the Table Read My Screenplay Spring 2022 Genre Competition.

Woohoo! We're headin' to Nashville! Virtually, anyhow. Our supernatural crime TV pilot, Near Death, is a finalist in the Nashville Film Festival Screenwriting Competition. We are so excited to participate in screenings and zoom panels and meetings and more this October, 2020.

Hey everyone! Wanted to share the interview that Carlo and I recently gave the online screenwriting magazine MovieBytes after two of our scripts, DARK HORIZONS and TIME ZERO, ascended to the VERY TOP in their ranks of 1000+ award-winning scripts. We are so so excited because our feature film script (TIME ZERO) was just acquired by Canadian producers who are very passionate about making it into a great film as early as this Autumn! We would also love to thank our manager
Kathy Muraviov for negotiating for us. More soon!
https://www.moviebytes.com/hollywoodIQ.cfm?ColumnID=7678

The Careres, husband/wife writing team, have signed purchase agreements on two feature films so far in 2020. One was Time Zero, a thriller being produced by Canadian Production Company, Chamber Zero Films, Ltd. Another script, Mindgate, has producer Joel Shapiro of Bluegrass Pictures attached, with Simon West set to direct and Chinese star Yao Xing Tong attached as one of the leads. They were hired by Settima Pictures as writers on a documentary to be produced and directed by the Emmy-nominated Konwiser Brothers in conjunction with Jim Brown (former NFL great) entitled Rock: The Power of Change, about a former Crips leader turned basketball coach who is saving kids from the streets.  After winning seven prominent awards, including Final Draft Big Break, their Sci-Fi pilot Dark Horizons, has director/producer Mike Le’ Han attached. Their TV Pilot Near Death, based on a short film of the same name, is a Finalist in the 2020 Nashville Film Festival Screenwriting competition.


“My heart goes with Dark Horizons. This show should be made!”


“Excellent script in so many ways. Professional-level execution on the page. Full of cinematic action and human emotion. The story evolves in intriguing directions. The concept is scary, original and involving. Despite all the violence and horror elements, it also has heart -- with the main character’s family relationships grounding it all into something relatable.”

WINNER in the 10TH ANNUAL STORYPROS AWARDS where it won 1st PLACE in the action/adventure/thriller category.


ABOUT ERIN CARERE, WRITER
A published poet since age 16, Erin holds a Bachelor of Arts in English Literature, Magna Cum Laude, from the University of Minnesota, and studied singing at the prestigious Manhattan School of Music. She toured the country and Europe as a singer-songwriter before moving to Los Angeles, where she began writing one-woman shows and plays. She began writing screenplays with partner Carlo in 2014. She is also the author of an unpublished novel based on a produced stageplay of the same name, My Life as a Phone Psychic. As of summer 2020, she is nearly complete with the 270th draft of a contemporary magical realism novel. 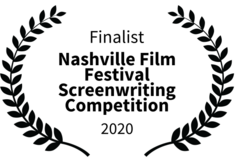