Spy v Spia: opportunities to watch in person and online!

Friday, November 4th at 4 pm in the LA Area:
As an Official Selection of the Studio City Film Festival at the Laemmle Noho 7. (The ticket link on the Laemmle website is broken, but the Film Festival said they’d honor any ticket for any section, or you can just get a ticket day of!)

NZ Web Fest kicks off on Monday, with all the podcasts and webseries available to enjoy from Monday 7 through Sunday 13 November.

From the festival:
We hope you’ll have time to enjoy some of what’s on offer, so please take a few minutes to register (it’s free!). You’ll receive the link to the page where all the content will be available to enjoy, starting on Monday 7 November.

It'll only take a couple of minutes - and IT'S FREE!

You’ll find lots of info on our website, so please check out our programme: https://nzwebfest.co.nz/programme-2022/

Tuesday, November 8th, Austin, TX:
As an Official Selection of the Austin Comedy Film Festival
AND
Where Carlo is nominated for Best Acting!

We screen at 3 pm, which is in Session 1. The Entire Session begins at 1:30 and there’s tons of great films!


Sunday, November 13th, Portland, OR
As an Official Selection of the Portland Comedy Film Festival
AND
Where we are nominated for Best Rom Com TV Series!


Thanks for your support. Hope to see you and/or make you laugh or swoon soon!

If you like piña coladas, getting caught in the rain…. Even if you ARE into yoga, long as ya have, mmm, say, half a brain??

Then you’re the audience member I’ve searched for!

I was featured in the latest issue of LAKE COUNTRY JOURNAL.

You can read the entire article HERE!

Next, NEAR DEATH will be distributed on PLEX TV! Soon, anyone almost anywhere int he world will be able to stream this scary supernatural thriller. More info coming soon!

I am so excited to finally announce this!

I had a major role in the HBO film, ALABAMA SNAKE, coming soon to HBO (December 2020.)

Alabama Snake, directed by Theo Love and produced by Bryan Storkel, explores the story of Oct. 4, 1991, when a violent crime was reported in the town of Scottsboro, Alabama.

Glenn Summerford, a Pentecostal minister, was accused of attempting to murder his wife (played by MEEE!) with a rattlesnake. The details of the investigation and the trial that followed has “haunted Southern Appalachia for decades.”

I played a role that may or may not have been the antagonist. Or was I a protagonist? As Hamlet said, "nothing is either good or bad, only thinking makes it so." But this story, in which I played a real person, will make you wonder: just who was the real snake in this story?

For more behind the scenes photos and info, check out my blog post about it here: 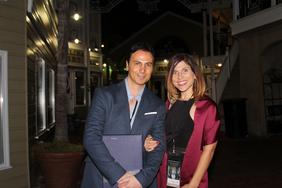 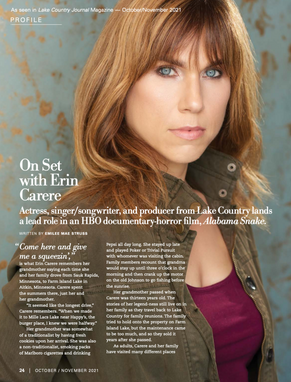 This means it has now won:

All my life, I’ve had certain dreams - about life, love, storytelling, acting, writing, and singing ! One of those was to be Jamesina Bond AND sing a 007 theme song.

When it turned out I didn’t get famous in my 20s (and beyond! Apparently a person continues to age as life goes on....)…. rather than say, ah, ok, I’ll just keep waiting- I said- nah! Let’s create projects where I get to do what I would want to do- have always wanted to do!

And based on me and my sweet partner in life and crime, Carlo Carere … a romcom about rival international spies was born.

I even got to sing the THEME SONG written by my dear friend Mark Mallman - it’s both sexy and hilarious - and I’ll link to a secret YouTube so you can hear it: https://www.youtube.com/watch?v=zEg_0Gu1zdE

So thanks to you all for all the support- because an #actorslife and #singerlife and #screenwriterslife sometimes demands that we also become #producers and #filmmakers and #contentcreators -
And turns out- it ain’t easy. But it’s a joy! And an honor to share.
Xoxoxo

A sci-fi feature script Carlo and I wrote, REVERSE, was named WINNER in its genre in the ISA Fast Track Fellowship! We are is proud!

SO MANY FUN ANNOUNCEMENTS!

First of all, I won the BEST ACTRESS AWARD at the 2022 HEX AFTER DARK FESTIVAL for SPY v SPIA! If you are in Vancouver/ Burnaby/ Calgary in October, you have many chances to see SPY v SPIA. Check out their festival here: https://hexafterdark.com/schedule/

Meanwhile, CARLO was nominated for BEST ACTING PERFORMANCE at the AUSTIN COMEDY FILM FESTIVAL for his work on SPY v SPIA. I am so proud of my sweetheart. :)

SPY v SPIA awards and selections so far include:

links for tickets coming soon, or look to the right at "Appearances!"

In other news, my novel, "Ghosting Shakespeare," was long-listed for the LeapFrog Fiction Prize, and is an OFFICIAL SELECTION at the Catalyst Content Festival!

The event will be held at the REGAL CINEMAS at LA LIVE:


We are excited to be sharing the bill with luminaries such as Jessica Chastain, Bruce Dern, Sally Kirkland (in the same block as us!), Danny Trejo and so many many more wonderful folks.

If you’re in Los Angeles on September 3rd, come on down and join us!

And if you are in PORTLAND, OREGON… or AUSTIN, TEXAS…..

Hold on to your bicycles and your hats! ‘Cause we’re coming to:


Both are in November, 2022.. More info with specific dates and ticket info coming soon.

LOGLINE: Two rival international spies join forces against an evil organization only to discover secrets about their past, their future, and their hearts.

I was recently interviewed by SHOUTOUT LA about risk-taking, perseverance, and the City of Angels.

REVERSE is an official WINNER: RUNNER-UP in the OUTSTANDING SCREENPLAY AWARDS!

Emmy and Golden Globe winner Erik Bork was a judge. He gave us the following feedback on our project:

"Excellent script in so many ways. Professional-level execution on the page. Full of cinematic action and human emotion. The story evolves in intriguing directions. The concept is scary, original and involving. Despite all the violence and horror elements, it
also has heart -- with the main character’s family relationships grounding it all in something relatable."

We are proud and excited!

I've signed with a new management company representing me as an actor!

Thomas Ybarra and Jonny Espinoza from TOP PRIORITY TALENT are fantastic additions to my team!

"Alabama Snake" won an Emmy! Congratulations to Katie Hickman, Knox White, Britton Foster, Jimi Jones, Nisa Schoonhoven for your OUTSTANDING LIGHTING DIRECTION and SCENIC DESIGN EMMY! And congrats and thanks to Director Theo Love, Producers Bryan Storkel, Amy Bandlien Storkel, Bo Butterworth and ALL the cast and crew of "Alabama Snake.' I feel proud to have been a part of this film!

Our sci-fi/ drama/ action/ horror TV pilot, REVERSE, is the

#1 Sci-fi project of the month, of the year, and of all time on

Alabama Snake has been garnering some great reviews!

"Alabama Snake takes the concept of dramatic re-enactments and applies a level of stylistic showmanship rarely seen in documentaries...Alabama Snake is shot like a horror movie, and edited and scored like one as well...Love’s stylization makes Alabama Snake stand out from the crowd."
-Katie Rife, AV Club

Available on HBO or HBO Max NOW.... or click over to videos to see the highlight reel of my work.

Carlo and I spent a day at the ANALOG VIBE STUDIOS doing ADR and Voiceover for our action rom-com spy parody! We are closing in on a finished project that we are proud of- it's still making us laugh! 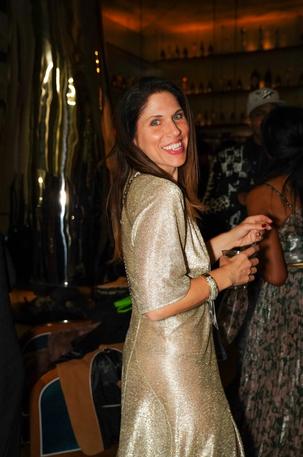 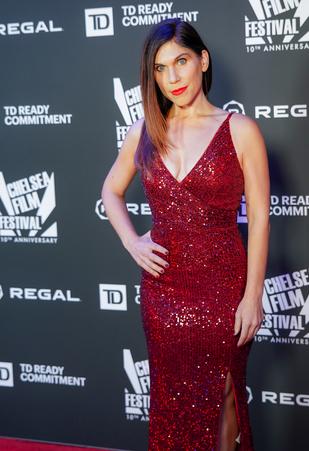 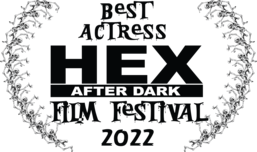 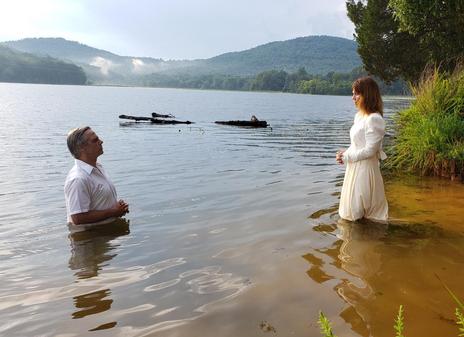 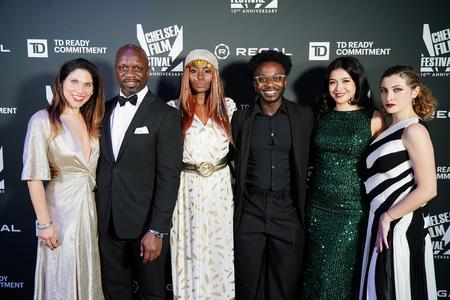 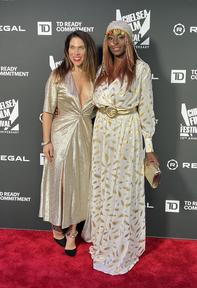 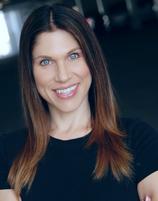 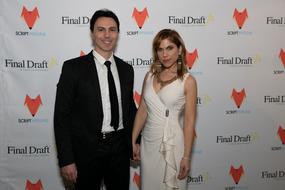 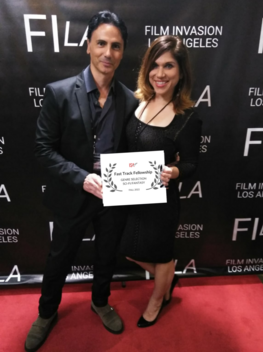 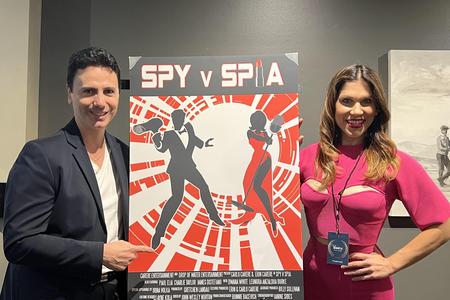 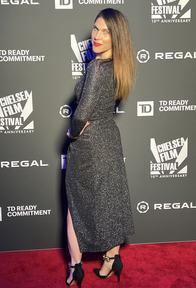